As the number of  refugees and asylum seekers arriving to Australia by boat rose sharply in 2012 and 2013, the  major political parties engendered a state of moral panic.  The long-standing debate over push versus pull factors  was resolved in favour of pull factors; that is,  it was finally agreed that Australia’s policies of welcoming  refugees and asylum seekers  made Australia an attractive destination that refugees would cross the world to reach. In the face of this we closed our borders to refugees and asylum seekers arriving by boat.  The Rudd government announced they would now be detained in offshore centres, refused entry to Australia at any point in the future,  and the Abbott government implemented a policy of  intercepting  boats at sea  and returning them to Indonesia.

Almost all of those who arrived in Australia by boat set out from Indonesia, so one would expect that  after the implementation of these policies the number of refugees and asylum seekers arriving Indonesian would have fallen dramatically. Yet this has not happened. Indeed looking at the statistics for Indonesia, the nation is more popular than ever as a destination for refugees and asylum seekers. 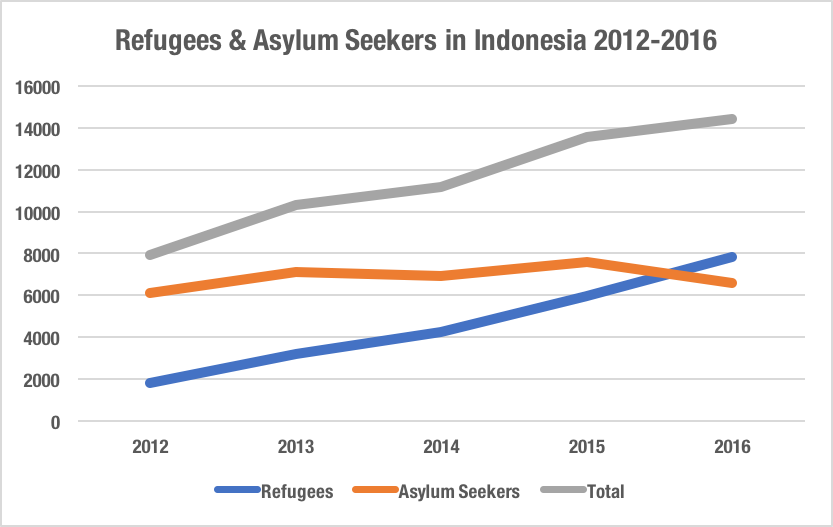 This makes the cruel debacle that unfolded on Manus Island and Nauru  and has now reached the point of farce even more tragic. Not only were there other options available to us that did not involve the degradation of human beings fleeing persecution, but the intentionally cruel option that we took looks like it was completely unnecessary.  There were no hordes  making their way across the globe to Indonesia to set off in boats for Australia. There were just men, women and children whose lives had been turned upside down by incredible violence and just wanted somewhere safe to live.

Thanks Scott. Can you please provide the link for the graph that you have published here? I am keen on doing some more research. Thank you.

Hi Dimitri,
The stats come from the annual UNHCR statistical reports 2012-2015 and the 2016 UNHCR Global Report. The links to them can be found at http://www.unhcr.org/en-au/statistical-yearbooks.html

Great article Scott. I totally agree. I’d like to send you a copy of an open letter to the PM on this issue that our minister at Canberra Baptist sent today.
Could you send your contact info to me so I can give you a copy. Thanks. Kelli Hughes

Hi Kelli, We’re friends on Facebook so its probably easiest just to use messenger. If this doesn’t suit let me know and I’ll send you my details another way