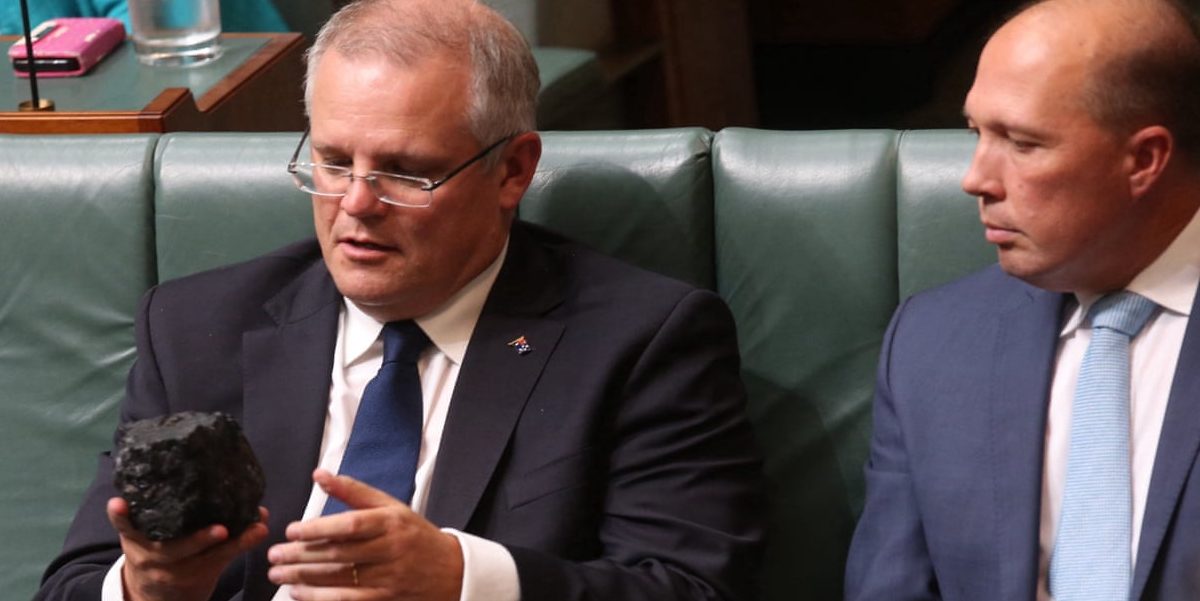 Last year Scott Morrison, then the Treasurer, carried a lump of coal into Parliament during Question Time, where he brandished it about, saying

“This is coal. Don’t be scared. It won’t hurt you…It’s coal that has ensured Australia has for over one hundred years enjoyed an energy advantage that has delivered prosperity”.

“ideological, pathological opposition to coal as being part of our sustainable and more  certain energy future.”

Yesterday the  international body responsible for updating our knowledge of climate change, the IPCC, release its latest report on keeping temperature rises below 1.5 degrees. Their report included this paragraph:

In modelled 1.5°C pathways with limited or no overshoot, the use of CCS would allow the electricity generation share of gas to be approximately 8% (3–11% interquartile range) of global electricity in 2050, while the use of coal shows a steep reduction in all pathways and would be reduced to close to 0% (0–2%) of electricity (high confidence). While acknowledging the challenges, and differences between the options and national circumstances, political, economic, social and technical feasibility of solar energy, wind energy and electricity storage technologies have substantially improved over the past few years (high confidence). These improvements signal a potential system transition in electricity generation (IPCC SR15 SPM p33)

The report notes that keeping temperature rises to 1.5° would have significantly fewer impacts upon the planet and the well-being of its people then a rise to 2°.   The Great Barrier Reef, for example, is likely to  diminish in size at 1.5° temperature rise,   but at 2° would  likely disappear completely.

This has  certainly wiped the smug tone from the government’s defence of coal,  but not their determination to see coal as an ongoing part of Australia’s energy mix  long into the future.  The conversation we should be having is how we  will replace coal with renewable forms of energy over the course of the next  couple of decades.  We have time to do it and to do it right. Instead we have a government burying its head in the sand, denying the IPCC report has any significance for us, and declaring support for the coal industry.  I think we all know who the pathological ideologues are.

Good point Scott, stunts like the lump of coal do not encourage conversation. I remember a PM (5 or 6 ago) saying climate change is the greatest moral challenge of our generation. But Australia still does not have an energy policy, and leadership is coming from business, i.e. those with a vested interest. Of course there are elements of Morrison’s speech that are true, when we settled this country we interupted 50,000 years of sustainable indigenuous cultures. Since then we have deforested most of the continent, extracted anything of value from the ground, introduced agriculture from other continents with no… Read more »

Hi Peter, thanks for your comments. My comment that “we all know who the pathological ideologues are” was meant to refer to the pro-coal segment within the Coalition and not to anyone involved in the coal industry. I agree completely that we need to work together to transition to a net-zero emissions economy and that many, perhaps even most, in the coal industry recognise this. To me, the good news is that industry and business are capable of generating astonishing solutions to global challenges. The bad news is that we have governments that are unwilling to generate the price signals… Read more »