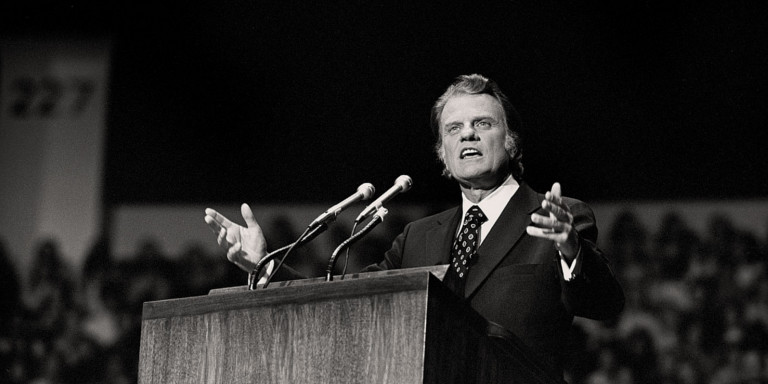 I just heard the news that Billy Graham died. Perhaps the greatest evangelist of history, I was one of millions who were profoundly influenced by his ministry. My mother was on the organising committee for the 1979 “Billy Graham Crusade”, held at Randwick racecourse. This meant that our household was swept up in the fervour of those crusades. I was 14 years old. I can’t remember whether I attended every night of the crusade or not, but I can recall the surging emotions; the energy of a large crowd; the tension rising within me as Billy Graham led us to a sense of moment in which we perceived we stood face to face with the God who created the Universe at a point of decision that would reverberate into eternity; the delirious joy and sense of holy moment as thousands of people responded to the invitation to signal their embrace of Christ by leaving their seat and walking to the stage.

My faith has changed much since those crusades,  but today is not the day to critique but to remember that they were part of an era that imparted to me the breathtaking news that the God who called the universe into being is filled with a love for creation, and for me as part of that creation, that is wider, deeper and stronger than I can imagine.

And I remain inspired by the humble integrity of Billy Graham. As one might expect, everybody wanted a piece of Billy Graham. The expectations of the Christian world were laid upon his shoulders. There were some who thought he should have aligned himself more intentionally with the great civil movements for justice that marked the last half of the twentieth century; there were some who thought his embrace of groups outside the confines of conservative evangelicalism were unacceptably compromised. Yet whatever one might make of these things, Billy Graham spent half a century as a high profile world Christian leader without scandal. He did not take advantage of his position to amass obscene amounts of wealth; to solicit sexual favours; or to play power politics. He dies at 99 a man who is widely respected as a decent human being of deep personal faith and exemplary character.

This is a great tribute Scott. Thank you

Scott , unfortunately their is a generation that did not know him . His integrity and honesty puts many to shame