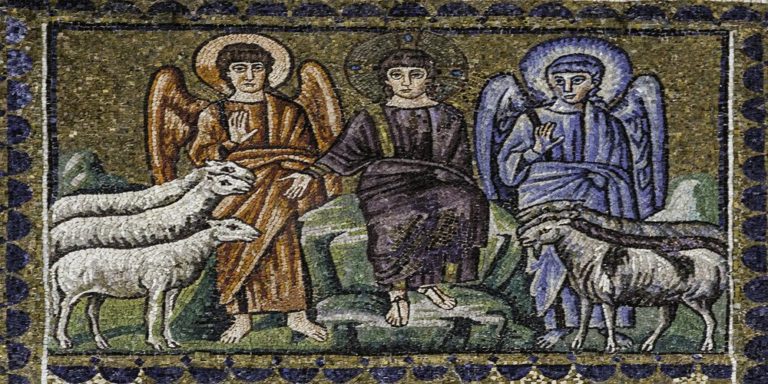 One of the most confronting parables Jesus told was his account of the sheep and goats (found in Matthew 25). The end of the age has come and humanity is gathered before Christ for judgement. Humankind is sorted into two groups: sheep, who the king claims fed him when he was hungry, gave him a drink when he was thirsty, provided hospitality when he was a stranger, clothed him when he needed clothes, looked after him while he was sick, and visited him while he was imprisoned; and goats, whom the king says failed to do these things.

Both groups are bewildered. They cannot recall ever seeing the king in a state of need, to which the king replies “whatever you did for one of the least of these brothers and sisters of mine, you did it for me.” The sheep are then welcomed into eternal life, while the goats are condemned to eternal punishment.

The story is difficult on a number of levels. First, it seems to set a standard for belonging to God’s kingdom that is impossible to meet. Who among us cannot recall a time we walked past a homeless person in the street; expended money on truly discretionary pursuits when we could have donated more to a charity helping people living in poverty; or let an opportunity pass to care for somebody who we know needed it at the time? If we are honest with ourselves it would seem that pretty much all of humankind would be goats.

Second, there are divided interpretations on whom Jesus is referring to when he speaks of “the least of these brothers and sisters of mine”. Some interpreters believe the phrase identifies followers of Christ, with the parable then speaking of the community of believers caring for one another at the same time that they are vilified and rejected by those outside the community of faith, or to itinerant missionaries who travel from town to town depending upon the goodwill and hospitality of those who embrace their message. Others argue that the least of these is a reference to all people in a state of homelessness, hunger, poverty, or victims of unjust treatment.

First, in telling this parable Jesus buys into a debate taking place during his time. As best we can tell, in the day of Jesus almost all Jews affirmed the notion that the time would come when the nations would be gathered judgement. The debate was on what grounds judgement would occur. Some argued that the sheep would be the Israelites and the goats the Gentiles. Others argued that the sheep were Israelites who were faithful to the law, and the goats were all others. Some allowed that there may be gentiles who were faithful to the law and so were part of the kingdom. Jesus subverts all of these interpretations, suggesting that the key issue is how they were related to him, the king.

Second, it seems to me almost certain that “the least of these brothers and sisters of mine” should be understood as a reference to human beings in general and not to the followers of Jesus in particular. The reason for this is that the one who speaks is identified as “the King”. He is clearly king over both the sheep and the goats, that is over all humankind. In the biblical tradition of kingship it was the sacred duty of kings to secure the rights of the poor and vulnerable groups such as widows and orphans (see Proverbs 30:1-9; Jeremiah 22:1-24; Daniel 7). The king is not to see his subjects as people to be exploited and oppressed, but as neighbours to be loved. The parable sets Jesus up as King over all humankind, so that “the least of these brothers and sisters of mine” are those subjects of low status who were pushed to the fringes of society and left hungry, homeless, exploited, and oppressed.

The point of the parable is not to suggest that entry into the kingdom of God is a reward merited by a life of virtuous behaviour, but to point out that those who belong to the kingdom are those who have identified themselves with the King and the King’s mission to bring kindness, justice, and mercy to those commonly denied it.

Moreover the parable calls us to much more than serendipitous responses to those we meet who are in need. In the culture of the biblical eras and particularly of Israel, people were hungry, homeless, physically weak, and imprisoned because the political and economic systems were designed to exploit them and the rich and powerful colluded to appropriate their wealth and labour. Read the Old Testament prophets and they don’t identify hunger, homelessness, and disadvantage as bad luck, an inevitable part of life in a broken world, or because of the laziness of poor. They consistently sheet the issue home to a failure of the rich and powerful to recognise the claim of the poor to land, to loans, and to debt relief.

The parable is a call for us who know the King to see ourselves as the king’s hands and feet in creating a world in which our fellow human beings are freed from violence, greed, exploitation, oppression and the evils these bring.

Finally, we need to be careful to read this parable in the light of the whole corpus of Jesus’s teaching. It would be a mistake to see this as suggesting any single failure to love those in need disqualifies us from belonging to the kingdom of God. Jesus speaks about the patterns of our lives as an indicator of the direction of our hearts and the nature of our faith (e.g. Matthew 7:15-23). This informs how we read the meaning of his parable of the sheep and goats. He is not suggesting that the sheep have never failed to love the hungry, the naked, the weak or the imprisoned, but that the pattern of their life is one of investing in those who are disadvantaged and oppressed. A comparison would be how we think of our parents. My parents were extraordinarily good parents to me because the pattern of their life was one of grace, love and generosity. This did not mean they were perfect. There were times of course when they failed to act with wisdom, grace or generosity, but these were not the pattern. Moreover Jesus’s relationship with his disciples was one of extraordinary grace as they learned to take the journey with him. Indeed in the Gospels are seen to stuff up more than they get it right, but the overall direction of their lives was one towards the way of Christ rather than away from it.

The parable and is not designed to induce anxiety over some lapse we may recall from our past, but to shape us as people who identify with the mission of King Jesus to bring hope, healing and deliverance to all human beings who are suffering exploitation, oppression and persecution.

Thanks Scott, a lot in this to think about. Just one comment though: I don’t find your argument about the identity of Jesus’ “brothers” convincing. There seems to be no support for such an identification of Jesus’ (or any king’s) “brothers” elsewhere in the Bible or, AFAIK, in the ancient world. The texts you cite do not identify the king’s subjects as siblings — that use of language seems quite distinctive in Matt 25 (by the way, I think you mean Prov 31:1–9, not 30:1–9). Certainly Jesus’ use of the term elsewhere in Matthew is restrictive (e.g. Matt 12:48–49), and reading… Read more »

Hi Martin, Thanks for the comment. In regard to the identity of “the least of these brothers of mine”: 1. The sheep and the goats did not perceive any connection between their care for the needy and their response Jesus. Surely this vitiates the argument that the response of the sheep and the goats to the disciples serves as an indicator of their response the gospel? 2. The argument that there is ‘no support for such an identification of Jesus’ (or any king’s) “brothers” elsewhere in the Bible or, AFAIK, in the ancient world’ is incorrect. There is in fact… Read more »

Hi Scott,
What are your thoughts on this interpretation that makes the parable more specifically related to those listening.