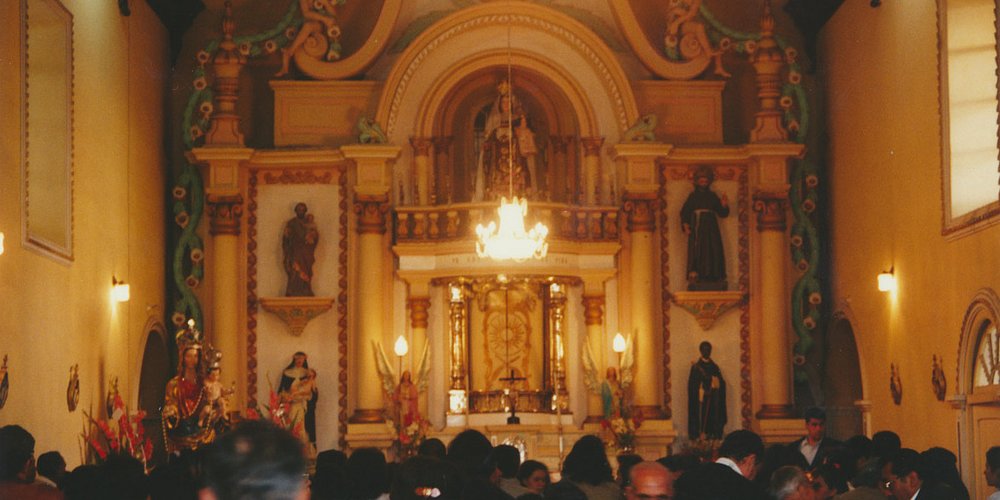 The census data is out and one of the headlines has been the rise of people indicating they have “no religion” and the corresponding decline in those who indicate an affiliation with Christianity. 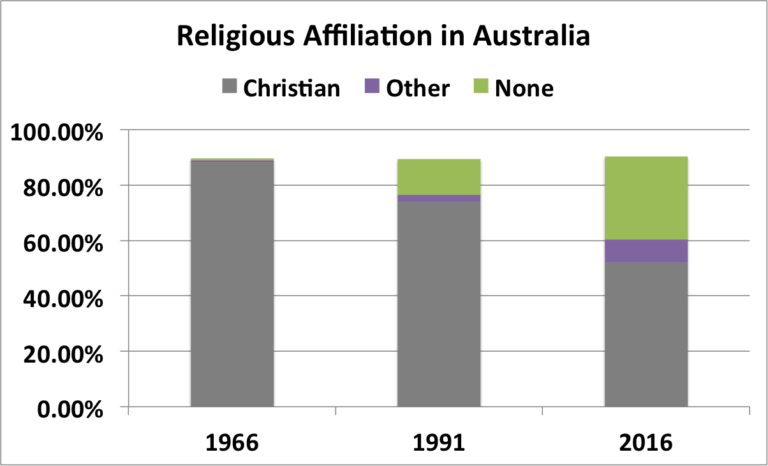 The census data, of course, only tells us about people’s nominal affiliation with a religious tradition. It doesn’t tell us much about people’s practise of religion. The sharp rise in people saying they have no religion and the decline of those affiliating with Christianity could very well represent those who have been irreligious for a long time now feeling comfortable to tick the no religion box on the census. To understand what’s happening in people’s lived religiosity we need to turn to surveys that measure religious practise, such as the Australian Community Survey (ACS), conducted every few years by the National Church Life Survey. This shows that:

Religion plays an important role in the lives of many Australians. The 2016 ACS shows that 16% of Australians attend a religious service at least one a month; 30% of Australians pray or meditate at least once a week and 39% say religion or spirituality is important in their decision making. These figures are far higher than I imagined and indicate that both institutional and non-institutional religiosity are a significant part of life for a lot of people.

Religion plays no role in the lives of many Australians 61% of Australians say religion play no part of little part in their decision making; 21% don’t believe there is any God, spirit or life force; 38% never pray or meditate and 48% never attend a religious service. 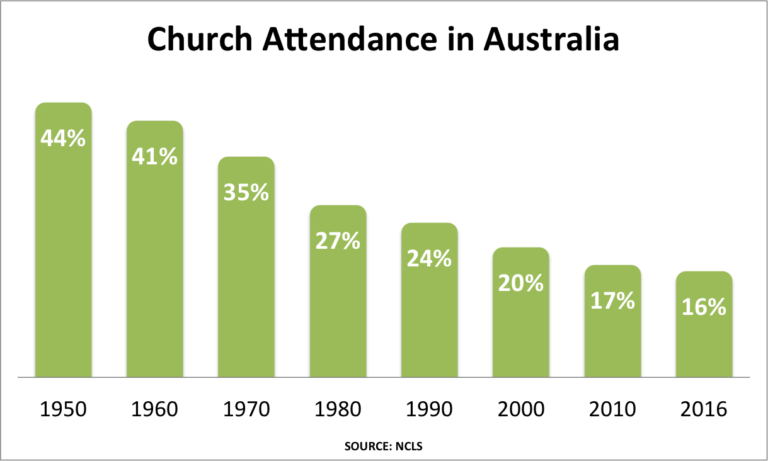 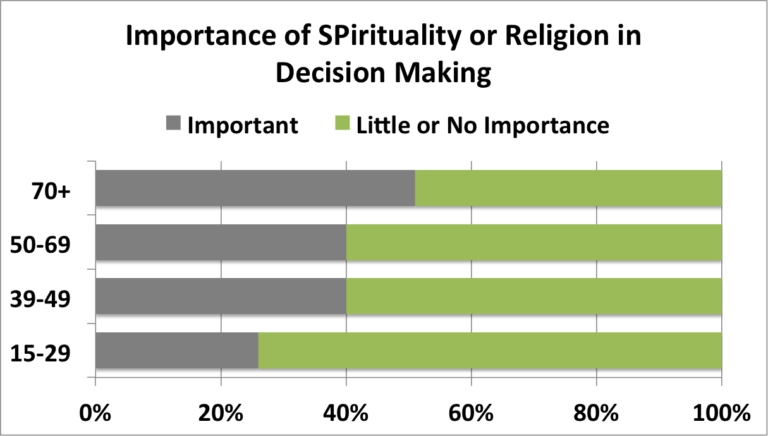 So what does this all mean?

First, it is impossible to speak of the “average Australian” when it comes to religion. We live in an Australia in which there seem to be at least three distinct groups: those for whom religion is an important part of their daily living; those who have a sense of connection to religion and are open to religious/spiritual experience, but for whom it remains somewhat removed from daily living; and those for whom religion has no part at all in their lives.

Second, I don’t buy the “Australians are becoming less religious but more spiritual” line. The age based data suggest to me that unless we define spirituality in very broad  terms to mean something like “I am/want to be part of something bigger than myself” the trend is towards a life in which people give no thought to God, don’t see any reason to participate in religious rituals, and derive their meaning in life and sense of purpose without any reference to God.

Third, the changing status of religion doesn’t simply mean fewer numbers of religious people, but has entirely transformed the place of the Christian church in society. In the middle of the last century almost everybody would have been connected with the church in one way or another. With 44% of the population attending church regularly it would have been difficult to live in Australia and not know someone who was a churchgoer and the high level of attendance gave credibility to churchgoing and the faith attached to it. With just 18% now attending church a large number of Australians will go though life with little or no firsthand experiences of the church or religious faith.

Fourth, the changing status of religion has left many Christians with a sense of dislocation and they are struggling to come to grips with life as a minority group. We are discovering that our ethics are not considered “common sense”, find our beliefs and values caricatured and mocked, and are increasingly overlooked in discussion of  public policy. This has led many to argue that we are losing our freedoms, which is not true – no clergy have been banned from preaching sermons articulating their faith, Christians are not routinely dismissed from jobs because of their faith, Christian schools and churches remain free from provisions of the anti-discrimination act. And while there is good reason to believe our society will need to renegotiate the nature of religious freedom, that we will need to champion religious freedom as the renegotiation takes place, and that this might make things uncomfortable for Christian institutions (e.g. institutions that act on behalf of the state may find they can no longer do so) I see no reason too believe our society is about to turn its back on the ideal of pluralism and the protection of  freedom of speech and religion.  What we are discovering is that when you are part of a religious minority people will disagree with you and often disagree quite strongly. Fortunately we live in a secular, liberal state in which the freedoms of minorities are protected so that even on those rare occasions critics overstep the mark our freedoms are legally protected.

Fifth, many parts of the Christian community have focused their sense of dislocation on opposing the new sexuality (assertion of traditional approaches to sexual intimacy and gender roles; opposition to marriage equality; opposition to new approaches to gender). I have been involved in faith-based advocacy for the last 15 years or so and I have been shocked at how the energy of the churches in the public arena has become so strongly of focussed on sexuality. This seems to  me to reflect a Christendom mindset in which we pretend that Australia is a “Christian country” and that conservative Christian values should be preferenced. We need to get used to living as a distinctive minority in a secular, pluralist country. In this context surely our calling is not to oppose the freedoms of others but to live lives of such magnificent graciousness and love that people are drawn to the Christ we follow.

Sixth, following from the last point, I believe we should see the decline of religion as an opportunity. There is something tremendously disconcerting that so many Australians could feel (and still do) comfortable identifying themselves with Christian faith and values. The Jesus of the Gospels calls us to belief in a God of love who is establishing his reign over our lives and world; to build our lives on the notion that Jesus of Nazareth was the greatest revelation of God in history; to live out of the conviction that Christ rose from the dead, is history’s lord and will return to remake our lives and world; to love our enemies; lay down our lives for each other in love; divest ourselves of wealth; remain steadfastly faithful to our spouses; value inclusive community over the exclusivity of family boundaries; take the initiative in making peace with those who have offended or wronged us; abandon the quest for revenge; value the interests of others before our own; seek justice for the exploited and oppressed; and to share the good news of the reign of God. These are values that are radically and subversively counter-cultural and that were tamed and muted during Christendom. Perhaps now that our community is distancing itself from Christianity we can finally be rid of the notion that the consumerist bastard child of British imperialism ever represented the Christ of the Gospels and rediscover what it means to say we are followers of Jesus.

Always worth reading Scott.Thank you

Actually this change in Australian religiosity has taken place with surprisingly little disruption. Certainly, there was some concern when the marriage laws were changed in 1975 and same sex marriage was passed in 2017, but many of the changes happened so gradually that few even noticed.