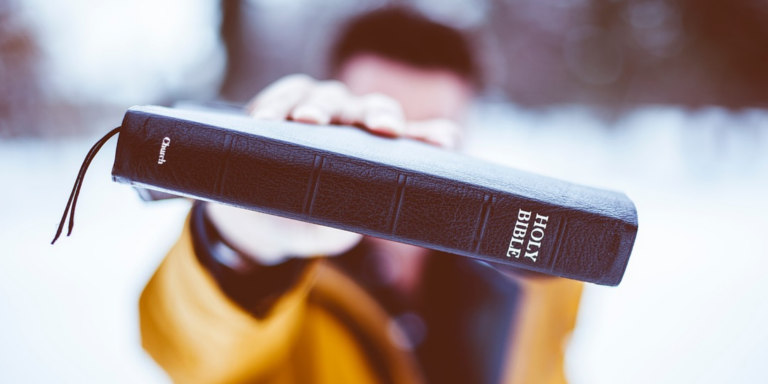 As a follower of Jesus it is my ambition to live in a Jesus-shaped way. In seeking to do this the Bible is one my key resources. Yet understanding how it applies to me can be difficult, for while I have grown up believing that what the Bible says, God says, it is clear that there are things the Bible commands or permits that are not what God says to me today – eg the permission to take a wife as part of the bounty of war; the requirement to return land to its original owners every fifty years; the permission to keep slaves; and the encouragement to wives to call their husbands ‘lord’ and be fully submissive and obedient to them.

I have found it helpful to recognise that the Bible speak to our ethics in two ways:

First, by painting a picture of the world as it should be and one day will be.  The  movement of both history and Scripture is towards a time all creation will  be brought fully under God’s reign. It is a time of shalom, which Christopher Marshall summarises like this

Biblical ethics fills me with this vision of the world as it will be and calls me to live out its values in the present. This is what gives Christianity its reformist tendencies. The vision of the reign of God causes us to be discontent with cultural, political, economic, and social systems that impede the experience of shalom.

At times this worked itself out as resistance – seen for example in the refusal of Christians to worship any God other than the God revealed in Jesus and in the determination to defy social conventions that divided people on grounds of ethnicity, gender, or social status and instead embrace one another as brothers and sisters in Christ.

On other occasions we see an effort to infuse the values of the future into social,  cultural and political systems that fell far short of the vision of the future. The household codes of the New Testament are a good example of this. They recognised that first century Christians lived in societies in which the household was organised along patriarchal lines – with a male at the head of the household and wife/wives, slaves and children subservant and subordinate to the male head. Held up against the vision of the world to come this was an ugly structure that diminished people and left them exposed to abuse. Yet it was also the reality in which people lived. The strategy of the household codes was to urge people to infuse the system with love, grace, compassion and kindness.  As an ethic for all time it is clearly compromised and inadequate, but it was an ethic that moved first century Christians closer toward the biblical vision.  Similarly, the permission given to the Israelites to take wives as part of the bounty of war seems designed not to offer approval of the practise, but, knowing it will happen, to regulate it so as to minimise the harm.

Recognising this pattern in the Bible has helped me move beyond a simple equation of biblical commands with the will of God for all people and all times, or the assumption that some biblical instructions are culturally shaped while others transcend culture.  It encourages me to see that “being biblical” does not mean replicating the life of the first Christians, but following the pattern of the Scriptures which is to allow the vision and values of the future reign of God, so vividly and profoundly incarnated in Christ, to shape the way I live in my place and time.

Hey Scott – I agree very much with your article and have been considering this myself recently. I think the best scriptural example of the New testament church working this out was the Jerusalem council in Acts 15 where the preachers in Paul’s church were preaching very legitimately from the Torah saying that it was quite clear that circumcision was for all men for all times. When it was brought to them the council decided that although scripture did say that, they had seen the Holy Spirit present on the gentiles and therefore if God had shown his approval irrespective… Read more »

Hi Daniel
Thanks for your comment. With regard to your question, I see nothing in my blog piece that is incompatible with a classic evangelical doctrine of inspiration

Thanks for the reply – I understand your comment about inspiration but what about the sentence affirming Scripture as being ‘the ultimate, authoritative guide’? I found the term ‘ultimate, authoritative’ troubling as surely it is the Holy Spirit who guides us in all truth as my earlier response would suggest?

Hi Daniel I think the whole question is problematic. When we start to unpack the concept of “inspiration” it becomes quite convoluted. Are the psalms inspired in the same way as the prophets? The historical books of the OT often draw upon material from earlier sources. Did the authors of the biblical texts get divine guidance as to when their sources were faulty? Errors in fact are said to be the result of “phenomenological language. How is this any different from saying that the author believed something to be true but was wrong? Similarly, declaring Scripture to be the ultimate… Read more »

Now that is a statement I could affirm!! Thanks Scott

Daniel: read Marcus Borg’s: ‘Reading the Bible AGAIN for the First Time.’
He states that every word in the Bible is the word of its writers NOT of God’s.
So, he takes the Bible seriously but NOT literally.

Hi Scott. I have been reading a few of your articles recently, and while I do not agree with some of your views, I respect and value your approach to faith, scripture and Christianity. I believe it is important for all of us to humble ourselves before the throne of God as we seek the truth of His Word- and I think you do that well. Continue writing in faithfulness!

Thanks Scott! A beautiful hermaneutic!

Hi Scott, Great thoughts, as always. I like your balance of taking seriously Scripture as the word of God to inform our ethics, but avoiding narrow, error-prone interpretations. I also like the balance of past and future “God’s vision” contexts as a way of informing this. One of the challenges for evangelicals (myself included) is to avoid reducing Biblical interpretation to a set of rules – however sophisticated. We need to hear the word of God in the context of our Spirit-based relationship with God and tested by the gifts active in the community of believers (1 Cor 14). This… Read more »

A further thought, if I may. My go-to test for hermeneutics is Matthew 4. When the devil quotes Psalm 91 at Jesus, how did Jesus know that Deuteronomy 6 was the more relevant text to apply in his circumstances? How would your framework inform this choice?

Hi Stuart, I think that two things guide the presentation in Matthew 4. First, Jesus is reliving the experience of humankind in the garden and the Israelites in the wilderness. The Satan comes with half-truths, but unlike the first man and woman in the Garden Jesus does not fall for the lies. Similarly, just as Israel’s trust in Yahweh was tested in the desert and saw them fail, so Jesus’s trust is tested but he proves more than a match for the tempter. Second, the debate between the Satan and the Christ sounds very much like a battle for honour… Read more »

Thanks for the thoughts. And, indeed, it’s because Jesus doesn’t reveal his hermeneutic that I think it’s an interesting test of any one we want to propose. I hadn’t considered the parallel of the temptation in the garden, so that’s an interesting reflection. With regard to the wilderness parallel, the context makes this very strong. If Jesus’ mission is to fulfil the Isaiah 40 promise of the coming of the Kingdom via the “way in the desert” (Matt 3), then the original desert journey out of Egypt is very relevant. Your proposed approach works well here – the “to be”… Read more »

Hi Scott. I quite liked this article. The provocative title makes one think hard about what the Bible states on one hand and what it commands on the other. I like Paul’s statement to the Jews at Antioch in Acts 13 37-38, where he got to the point about their strict interpretations of the law. Here we see his answer is that “only through Christ can forgiveness of sin be achieved, and the freedom( to live a life of the future) grants by this is what the Law (of Moses) could not free us from. I think this illustrates your… Read more »

Hi Scott, I’m sorry to say I’m a little disturbed by this article and this type of reasoning. Not that I disagree with with your conclusions, but rather the approach you have taken. Surely for a Christian, we should be seeking to allow God to speak to us on these topics because we can all have all sorts of thoughts and ideas. Therefore I would think that the starting place for a believer would be the Bible itself – and what does it say that is relevant here. To me the starting place is the words of the Lord Jesus… Read more »

Hi Ray
I am struggling to understand why you see my suggestion as belittling Scripture or as not taking the scriptures seriously. I am not suggesting we can set scripture aside, but that we take account of the manner of its ethical reasoning.

Thanks for your reply Scott. I’ll try to explain better what it is I mean and hope I will succeed. Whether you agree or not, I do hope to be understood, as I believe it is important. I expect we would all agree that Scripture is God’s word primarily telling us about Himself and the relationship that He desires to have with us. A flow on from that is how we should live in relationship with each other. So I believe it is important to establish that as the starting point, rather than the things we should dismiss in it.… Read more »

Hi Ray, thanks for the additional comment. I’m not convinced that emphasising the authority of Scripture really gets us anywhere. If someone came to me and said they were going to cut off their hand in obedience to the teaching of Jesus, or that interracial marriage is wrong based on the ban on marriage to foreigners in the OT Law we would not accept that they were hearing the word of God to them. To be meaningful the statement that we affirm the authority of Scripture has to be heavily qualified. For example, we distinguish between old covenant and new… Read more »

Thanks for your reply again Scott (I’ve been too busy to get back earlier). You seem not to take account of my original assertion that we should apply the emphasis that the Bible itself uses. The Lord Jesus said which were the important criteria to base everything on. Whereas you seem intent on being your own judge of Scripture – that is by your own reason = same thing. You also acknowledge that some things in Scripture relate to the culture of the day (and as I said, I agree), yet I don’t detect that you realise that wherever we… Read more »

The Bible is only a small fraction of the numerous sacred scriptures which were around in a fluid and liberally tolerant mixture of views for 300-400 years AD. Read the New New Testament that includes some of those other Gospels, such as Mary Magdalena’s, Thomas’ and Judas’ Gospels. For example, while we hold Judas to be a traitor, his action seems in such a different light after you read his testament, that you might be tempted to think that in fact he was the most self-sacrificing and obedient of all the disciples, carrying out Jesus’ request to him in spite… Read more »